The Picts battle the Scots for possession of Caledonia


Dunadd was a formidable Celtic hillfort set upon a rocky outcrop surrounded by bogland. It was the main power base of Dalriada, the region of northwest Scotland ruled by the Scots from the 5th century. Confusingly to many who are first studying Scottish history, the Scots were not natives of Scotland, but were in fact Irish Celts who sailed across the Irish Sea to raid the western coasts of Scotland and the rest of Britain. The were called æScottiÆ, a name perhaps derived from the Irish verb æto plunderÆ. They had fought against the Romans, and now that the empire was in decline, they decided to settle in Britain, choosing the land of the Picts in Scotland for their main settlement. 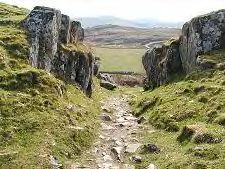 The hill-fort of Dunadd, in mid-Argyll, is but one of many power bases for the old kingdom of Dalraida, and perhaps the most important. The site consists of a series of defended terraces, surmounted by a summit fort. It has been excavated three times in the 20th century. Finds, dated from the sixth to the ninth century, include fine metalworking, with many brooches and tools. Recent archaeological excavations have shown that Dunadd was irregularly occupied from 500 to as late as 1,000 AD. Evidence of skilled craftsmanship, including jewelry, bronze, silver and gold work was found. Dunadd was also a major trade center with Ireland and the west coast of Britain and even to the Mediterranean. 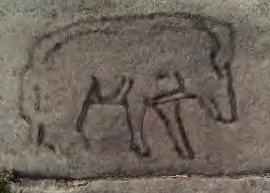 Below the summit fort, on one of the lower terraces, are a rock carving of a boar (pictured above right), an enigmatic description in ogam writing, a rock basin, and the outline of a footprint, all giving rise to speculation that this was the site where rulers of Dalriada were inaugurated. These ceremonies probably would have had elements of both Christian and pagan ideologies. In the initial years the pagan aspects would been predominant but as time passed, and the Scots were more Christianized, the pagan elements would become more and more negligible as the powerful influence of Christianity increased.

Some experts have gone as far as to suggest that the importance of the footprint (which is now covered by a replica) is to signify the kingÆs relationship to the land. According to this belief, the would-be king placed one foot in the designated footprint, the other on the land, symbolizing his unity with the land and the deity. Dunadd would remain a spiritual stronghold and center until the capital was moved to Scone in the ninth century. 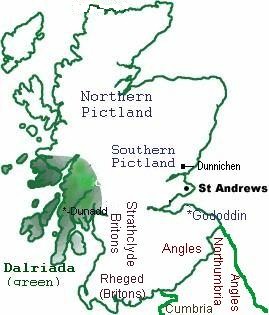 The Irish Scots continued the great tradition of Celtic seamanship. There most typical seagoing boat was the curragh, or curach, a simple oval structure made of animal hides stretched across a wicker framework. This crude but effective boat continued to be in use in Ireland and the Scottish western Isles all the way to the 17th century. They were surprising resilient in rough seas, enabling the Scots to raid as far south as Wales and southern England. In 891, the Anglo-Saxon chronicle records that ōthree Irishmen came to King Alfred in a boat without a rudder, from Ireland whence they had made their way secretly because they wished for the love of God to be a foreign land. It was made of two and a half hides and they carried with them food for seven days. After seven days they came to land in Cornwall and went immediately to King Alfred.ö One gets the impression they might have been escaping some, as yet, unpaid Celtic justice and sought lands elsewhere. In the late 1980Æs, a Celtic curach was reconstructed using hazel rods woven together to which three cowhides were stitched. The whole process to only one week to complete and was ready to rowed on the sea.

The Picts were a mysterious people about whom very little is known. Mainly Celtic, probably also mixed with older indigenous cultures, they appear to have spoken a language that included an older tongue of the aboriginal people they displaced or, more probably, with whom they assimilated. According the Dr. Anna Ritchie of Historic Scotland, "The Picts were Celts. Their ultimate ancestors were the people who built the great stone circles like Calanais on the Isle of Lewis in the third millennium BC in Neolithic times, and the brochs in the early Iron Age from about 600 BC to 200 AD." Pict seems to be a Roman name meaning ōPainted Peopleö, indicating that they followed the Celtic custom of either painting or tattooing with blue patterns. This was not unique to the Picts for most Celtic tribes of Britain and some from other places, such as Gaul, had done this. The Picts were a fiercely independent people who appear to have succeeded in the battles against the Romans, being descendants of the Caledonian tribes that the Romans first encountered. Having lived without Roman domination, they then had to contend with the Gaelic speakers of Dunadd.

One of the Aberlemno stones 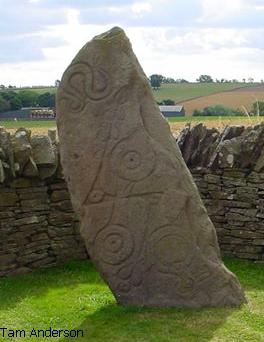 The Pictish style of warfare has been recorded on a few engraved stone slabs. Keen horsemen, like all Celts, they used both javelins and longer lances. Their foot soldiers fought with longer spears or pikes and may have even had formations, the likes of which were not seen again until William Wallace and Robert the Bruce reintroduced these speared units against the English.

They also carried the characteristically square shield decorated with swirling Celtic patterns. They also seem to have acquired some Germanic spangenhelm-style helmets, which were likely derived or taken from the Angles they fought on the Scottish border. Such helmets are depicted on the Aberlemno stone, but they may be depicted there to represent the Angle enemies. One surprising weapon depicted on these stones is a crossbow, not generally thought to be in use until much later in Europe. But, it can be clearly seen on the Drosten stone, and perhaps learned from fighting the Romans; it should be included in the Pictish arsenal. 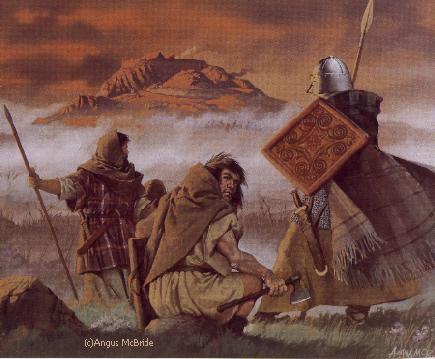 The Picts, seen above watching the Scots at Dunadd, and the Scots fought for centuries for the control of northwest Scotland. In 740, the Irish Annals of Ulster recorded a major campaign by the Picts against Scottish Dalriada. Led by Angus mac Fergus, they captured several strongholds, and an unnamed Scots warlord was savagely drowned, forcing the other to flee back to Ireland for a time. The Angles took advantage of this incessant conflict and invaded the eastern highlands, but the Picts, who seem to have had an informant, met them at the battle of Dunnichen (sometimes called Nechtansmere) in 685 and soundly defeated them, ensuring Celtic independence in Scotland. The victory may be commemorated on the Aberlemno stone. In the end, however, the Scots triumphed over the Picts in the mid-9th century, and a Scots king (MacAlpin) succeeded to the Pictish throne around 843 AD, in what some call ōThe Treachery of Sconeö. As a result, the highlands now bear the name of the Scots rather than being known as Pictland.