"There were countless sea-vomitings of ships and boats," wrote the Celtic chronicler of the "Wars of the Gaedhil (the Irish) with the Gall (the Vikings, meaning foreigner)" in the early 10th century. "Not one harbor or landing-port or fortress in all of Munster was without fleets of Danes and Pirates (Norse) ... They made spoil-land and sword-land. They ravaged Ireland's churches and sanctuaries and destroyed her reliquaries and books. They killed Ireland's kings and chieftains and champion warriors. They enslaved our blooming, lively women, taking them over the broad green sea." The arrival of the Vikings was a disaster for the Celtic people of Britain, pushing them even further to the fringes of the land. It was a disaster that also overtook the Saxon world, placing large sections of eastern England under Viking rule. Norwegians and Danes first took possession of the northern and western islands of Scotland, setting up their own kingdoms, which has given a Norse element to these lands ever since. They set up bases in the Shetlands, Orkney, and the Isle of Man. From there they were able to launch raids on Scotland, Ireland and England and even France. After these isles were secured, they then sailed into the Irish Sea and swept around the Irish coast, making settlements at the mouths of the rivers before taking to horses and plunging further into the Irish countryside. From about the second century BC until the late eighth century AD Ireland had enjoyed freedom from external attack or settlement. This was in marked contrast with the experience of neighboring Britain or the continent during the same period. Britain, for example, like Ireland, had been settled by Celts and at approximately the same time. But Britain, unlike Ireland, was also to experience conquest by the Romans in the first century AD and to be further colonized by Germanic peoples during the fifth and sixth centuries. The Annuals of Ulster charted the Viking progress. In 795, they came to Ireland as sea-borne raiders. By 810 AD, they were engaged in battle with Irish warriors, slaying the men of Connemara. No one seemed able to resist their onslaught. The first recorded Viking attack on Ireland occurred in 795. In that year the annals of Ulster recorded 'the burning of Rechru by the heathens'. Although it is usual to identify the Irish place-name of Rechru or Rechrainn with the island monastery of Lambay off the coast of Co. Dublin, this identification is not secure. It is possible that this entry may refer to an attack on Rathlin Island off the Antrim coast, that Rathlin was in fact the first place in Ireland to experience a Viking raid.

But it wasn't only the Vikings who plundered Irish monasteries: the Irish had too. A monastery might also be closely identified with its patrons and benefactors among the local lay aristocracy which had endowed it with its landed wealth. The office of abbot, for example, was frequently occupied by a member of the original founding family. The consequence was that a monastery could become a target for attacks during the petty feuds waged by rival aristocratic factions. The monastery or church of an enemy, since it was an integral part of his prestige, and probably also of his economy, became a legitimate target for attack in raid or war. However, a monastery could seek legal redress or compensation from an Irish attacker, it could not subject the Vikings to the same process of law. To that extent it may have suffered a greater degree of permanent damage. The Vikings were also interested, and, indeed, probably more interested in the food provisions, the livestock and cattle and even the human population of monastic settlements, some of whom were carried off to be sold as slaves.

Irish and Norse battle of the Irish coast 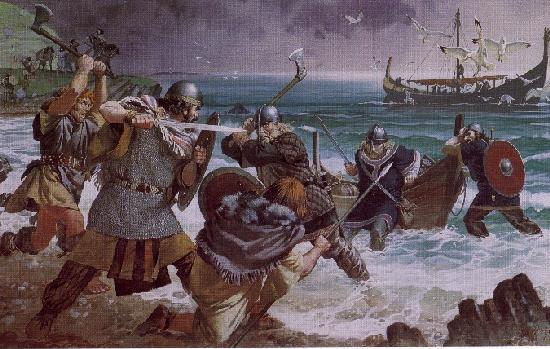 The Irish fought back, though, and in the same year the men of Owles and Munster slaughtered some Vikings, or 'gentiles', as they were called in the Annuals. But the raids continued in intensity. In 820 AD, the Vikings invaded Bangor in County Down. In 824 AD, Downpatrick was plundered and burnt, and its churches destroyed. By 826 AD, the high king of all Ireland was forced into discussing joint action with all the Irish warlords, but to no avail. The Vikings were there to stay, developing major fortified settlments at Dublin, Waterford, Wexford, Cork, and Limerick. These Viking created towns were Ireland's first true cities. What was distinctive about Viking activity was that by the eighth century, Scandinavian society, as we know now chiefly from archaeological evidence, had developed highly sophisticated boatbuilding techniques and in particular a sturdy vessel with a shallow draught, a vessel which could be depended upon to undertake long sea journeys and yet was still suitable for beaching in shallow waters. This enabled the Vikings to get into and out of areas quickly and then sail on the rough North Sea to safety. These longboats were the first real innovation in sailing technology in centuries. One interesting thing about these long, slender ships was that they were constructed so as to allow to bending (somewhat) of the entire frame. This may explain their ability to take on rough seas without cracking or breaking in the larger waves and tides. With recent discoveries showing that the Romans had established similar trading posts on the Irish coast (previously it was thought the Romans had not been in Ireland), it seems the Vikings were content not to conquer the whole of Ireland but to limit their possessions to the mouths of rivers where they could continue with the great Scandinavian trading network of northern Europe. They took a similar policy towards Scotland and took only the western Isles and the far north. Again, same as the Romans, it was not all bad news for the native Celts of Ireland. According to the Irish author of "The Wars of the Gaedhil with the Gall", the Vikings were successful because they were so much better armed: "the excellence of the foreigners' polished, treble-plaited, heavy coats of mail, their hard, strong swords, their well-riveted spears..." It seems unlikely that mail armour, so common to the Celts from Europe, was unknown in Ireland. The Irish had long enough access through their own raiding to the rest of Britain, and mail was a familiar enough armor at the time. It is probable that the Vikings, through their raiding and trading, had access to more of this armor and weapons. It was this military affluence that impressed the Irish, and it was no doubt shared with them through continued interaction in peace and war. The Irish also learned to use the Vikings to their own end. In their endless tribal civil wars, one Celtic side could always be counted on to pay a Viking war band to support them against the other Celts. The Vikings, always ready for a fight, readily agreed. Thus, the Celts have always been their own worst enemies, seeking outside help that ultimately weakened their own position. Equipment is known to have included two-handed, long hafted battle axes used by both sides which appear to have been partially imported by the Scandinavians and later adopted by the Irish. Viking swords were exceptionally strong with a wide blade and lobed pommel. These swords were often copied, bought and stolen. Periodically throughout the Viking period in Ireland, the Irish fought back against their presence, and in 902 AD a major campaign threw them out of Dublin. But they were soon back, perhaps because the Irish had grown to depend on them, as well, for their trading connections. By the 11th century, however, an Irish warlord appeared who would really shake the Vikings to their roots. His name was Brian Boru and we shall take a brief look at him next.