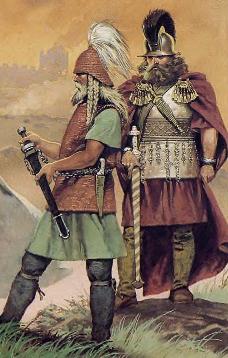 After the Sack of Delphi under Brennos, the Celts retreated to Macedonia where many of them remained, living off the land. Some of them grew greedy and decided to attack the camp of the wealthy Greek warlord Antigonus. It was a night attack, but the Celts found the Greek camp empty. They had been tricked. Antigonus decisively defeated them at the battle of Lysimacheia in the winter of 278 BCE. Realizing they were now no longer masters of Greece, the Celts let another adventure beckon them. A war band marched eastward towards Byzantium and crossed over the sea into Asia. Here, as mentioned before, they fought as mercenaries for the king of Bithynia before they moved further east to establish near modern Ankara, Turkey. This kingdom was known as Galatia and was the furthest east the Celts ever ventured from Europe. However, the Celts werenĺt confined to just Europe, even excluding Galatia. They seemed to have been prized warriors as mercenaries in countries as far away as Egypt.


A century before the Celts invaded Greece, they had served in the Greek armies as mercenaries, where their skill as horsemen had been particularly valued. Xenophon, a Greek chronicler and cavalry officer of the 4th century BC, describes their performance in the wars between the Greek city-states, in this instance against the Thebans:

"Few though they were, they were scattered here and there. They charged towards the Thebans, threw their javelins, and then dashed away as the enemy moved towards them, often turning and throwing more javelins. While pursuing these tactics, they sometimes dismounted for a rest. But if anyone charged upon them while they were resting, they would easily leap onto their horses and retreat. If enemy warriors pursued them from the Theban army, these horsemen would then turn around and wrack them with their javelins. Thus they manipulated the entire Theban army, compelling to advance or fall back at their will."

This is fascinating description of the Celts in battle, untainted of mythic visions of them as naked barbarians. Here, they seem to have the capability of performing as dragoons would in later centuries, acting as mounted light infantry, able to fight on horseback and on foot. 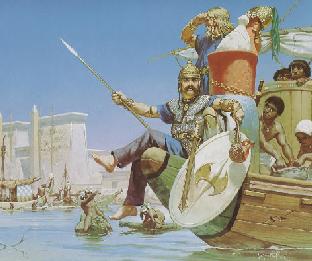 The reputation of the Celtic mercenaries extended as far as the Greek world and, following the collapse of Alexander the Great's empire, there were several Greek warlords ruling over kingdoms around the Mediterranean. In Egypt, the Ptolemaic dynasty reigned, but it brought with it a dependency on Greek mercenaries. Sometimes this reliance could be exploited, and around 259 BC, Ptolemy II, who was on the verge of war with a rival, found his own Celtic troops had mutinied. They wanted to set up their own Celtic kingdom along the Nile. Ptolemy defeated them and took severe retribution. Those that were not killed were left on an island in the Nile to starve to death. This experience, however, did not prevent Ptolemy II from recruiting new Celtic mercenaries years later. In a drawing by Angus McBride (above right, used with permission), the Celtic mercenaries take in the sights of Egypt.

Ptolemy II and Ptolemy IV continued to recruit the Celts into their army, collecting them from Hellespont, the thin arm of sea between Asia and Europe, suggesting that many Celts remained in Macedonia after their defeat by the Greeks. One time, a groups of Celts had to be shipped back because they had become demoralized by an eclipse of the moon, believing this signified their defeat, and they refused to fight. On another occasion, the Celts proved decisive. At the battle of Raphia, a force of 4,000 Celtic horsemen fought with the Egyptian army against the Syrians, who also had some Celtic mercenaries in their ranks. As the battle raged, some of the Egyptians fled from the combat and the Syrians pursued them. But when the Syrian infantry became disorganized, Ptolemy saw his opportunity and sent his Celtic cavalry, who were never happier than with dealing with broken formations of foot soldiers. Xenophon recalls a similar opportunity when Celtic horsemen rode after fleeing Greeks, using their long swords to cut down the running foot soldiers.

The Celts, described as blonde and red-haired, tall and muscular, were again used by Ptolemy V to suppress a rebellion. Some Celtic graffiti has been found on the tomb of Seti I from the time of Ptolemy V. It reads,

"Of the Galatians, we Thoas, Callistratos, Acannon and Apollonios, came, and a fox we caught here."

The graffiti was written in perfect Greek, indicating that as part of their service they had mastered the language of the Greek-led Egyptian army. It is interesting to note that one of the Celts, or Galatians in this case, had a name derived from the Greek god Apollo, whose shrine they vandalized one hundred years earlier.