Brennos the Celt vs the Greeks


In 279 BCE, the Celts were living an ambitious lifestyle, one that would eventually lead them to war. Just north of the Danube, they'd traveled south, pillaged Thrace and Macedonia and even killed the Macedonian king, heir to the legacy of Alexander the Great. The Macedonian empire had just undergone a break up, one that left them vulnerable to attack. Brennos, the leader of the Celtic tribes, had a plan. Whether or not the tales or war an atrocity by Celts on Greeks was deserved, it served the purpose it was probably designed for: the Greeks forgot about their squabbles and joined forces. 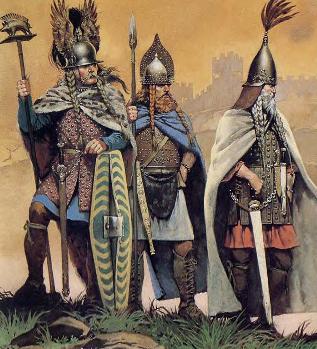 The clash of forces would come at a place already made famous for battles: Thermopylae. 200 years earlier, a Greek army, badly outnumbered, had fought the Persian invaders in a bitter last stand in the Pass of Thermopylae. In order to stall, the Greeks sent detachments of horse warriors to destroy all the bridges to the River Spercheius, thus slowing or stopping the Celtic advance. Brennos, not to be denied his plunder of rich Greek cities, sent some of his Celtic warriors to cross the river in slower waters. Swimming in the inky black water at night, using their shields as rafts where needed, the Celts made their way to shore. Somehow, the Greeks were forewarned, and they made their escape, going back to Thermopylae to mount a defense. Brennos forced the local population to rebuild the bridge. The Celts plundered Heracleia whilst they waited for the bridge to be completed. A little over a week later, at sunrise, the Greeks made the first move. The geographic location of the battle site mandated it would be a clash of the foot soldier, as the ground was rocky and full of streams. Horse warriors would have to dismount to fight.

The Greeks began the attack but where surprised by the ferocity of the Celtic army. Celts, fighting naked and unarmored, except for shields, would sometimes draw out the spears from their wounded bellies, and throw it back at the Greeks. This was going to be a brutal fight. Sling-stones and large bolts from Greek ballista (a large early crossbow the size of a horse), shot from triremes patrolling the river, assaulted the Celts every movement. The Greek defenses held the first day and the numbers of dead and wounded among the Celtic warriors was high. Brennos called in a clever diversion. He sent horsemen off to the neighboring region, Aetolia, with instructions to plunder. As they did, and as Brennos anticipated, word soon got back to the Greek camp of Celtic raiders in Aetolia. Soon, the portion of the Greek army that was from that area, were breaking out of the Greek camp to defend their homeland. The local Greeks were infuriated by this desertion but could do little to prevent it, short of killing their allies. Locals, angry at what they saw as freebooters, soon showed Brennos's men the nooks and crannies of the paths used by the Persians 200 years earlier, to outflank the Greeks. Early the next morning the Celts came flooding through the Pass, taking the Greeks completely by surprise. Fighting a rear-guard action, and withdrawing, the Greeks managed to get most of their warriors on Athenian ships, or it would have been a total rout. Thermopylae belonged to the Celts. 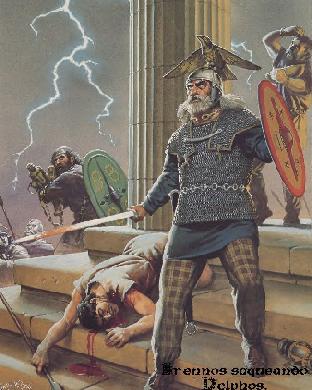 Almost from the moment the Celts, under Brennus, advanced upon Greece, it was if the gods of Olympus revealed their wrath to the invaders. One main goal was to take Delphi, the site of the ancient oracle of the Greeks. Suddenly earthquakes cracked and splintered the land out from under the Celts. Great rocks tumbled down from Mt. Parnassus and bottomless crags opened up. Thunder crashed all around the Celtic forces, as if Zeus himself was slinging down his rage. It is said Celtic warriors were caught by bolts from the sky, engulfing them in heavenly fire. Amidst the chaos, strange and weird shapes of ghosts in amour -- the dead of Greek battles -- arose and harried the Celtic invaders. As Delphi came into view, these supernatural forces were joined by the very real force of the Greek army. The local Phocians, using guerilla tactic, hid, but threw javelins and shot arrows down upon the Celtic ranks, sending them into disorder. Despite the onslaught, the Celts fought remarkably well. But that night, battered and exhausted, a panic spread through their camp. The Celts envisioned enemies on all sides and in the darkness and confusion, Celt killed Celt. Many were killed before order could be restored. The next day the Greek army chased the bedraggled Celts back to Heracleia, almost where they started. Brennos, already wounded and disheartened, took his own life and the Celts were harried all the way back to their own lands - that is, those that made it back.

This is the semi-legendary account of what happened to the first Celtic invasion of the great city-state of Greece. Of course, we aren't certain what happened and this account comes from a heroic tale written by the Greeks many years later.

Archaeology and science suggests something very different. According to more recent examinations of the history, as noted by authors Tim Newark and Gerhard Helm; The Celtic raid on Delphi did not fall short or end in dismal rout. The Roman historian, Livy, writes a very different account of the pillage of Delphi while Strabo even suggests that treasure found in a Celtic lake at Toulouse originated from Delphi. This would indicate that the Celts may have indeed taken the city and extracted some of its treasures before leaving. This does not sound like a disorderly and panicked withdrawal. Moreover, after satisfying themselves in Delphi they made their way to Byzantium (now Constantinople) and fought as mercenaries for the king of Bithynia. Then they advanced further into Asia Minor, now Turkey, and established themselves in a territory formerly belonging to the Phrygians near modern-day Ankara. The lands became known as Galatia and the descendants of those Celts continued to terrorize Asia Minor for over a hundred years, extracting tributes from lands as distant as Syria.

The author of the version of Greek-god intervention was Pausanias. In addition, he is guilty of the standard cultural cliché of the Celts: badly armed, poorly trained, near-naked savages barely out of the Stone Age; but somehow noble savages. Sound familiar? This is almost word-for-word the same description we get of the Highlanders in the 14th-18th centuries.

So how did the stereotype of the Celts get so accepted by historians right up to the previous century? We shall look at that and more Celtic Warriors soon. But first, the Celts take on the mighty Greek empire.