A much more detailed account of Mary, Queen of Scots' life is coming to this page in 2010.

Mary was the daughter and only child of James V of Scotland by his second wife, a French woman called Mary of Guise. While James lay on his deathbed at Falkland, Mary was born at Linlithgow Palace, Scotland. She became queen upon his death when she was a week old, and Henry VIII attempted to betrothe her to his son, Prince Edward of England, in order to establish control of her and Scotland, (known as 'The Rough Wooing'). 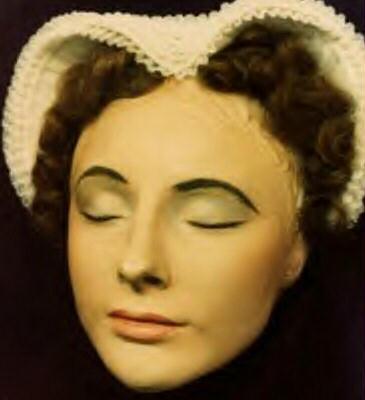 The betrothal was annulled by the Scottish parliament, precipitating war with England. After the Scots' defeat at Pinkie (1547) she was sent by her mother to France. There she was brought up at the glittering French court of Henry II, where she excelled at hunting and dancing, and was carefully educated in the manner of a Frenchwoman.

She married the Dauphin (1558), later Francis II, but was widowed at 18 (1560), and became the dowager Queen of France with her own estates and a substantial income.

Her presence was increasingly called for in Scotland, where the death of her mother (a beautiful but sometimes cruel woman, 1560) had left the country in a highly fluid and dangerous political state. Effective power was in the hands of the Protestant Lords of the Congregation, who had held an illegal parliament to implement the Reformation and ban the authority of the pope. Mary, very Catholic, therefore returned to Scotland in 1561. A Protestant riot threatened the first mass held in her private chapel at Holyrood, and a religious standstill was imposed, which in effect banned the mass to all but the Queen and her household.

Ambitious for the English throne, in 1565 she married her cousin, Henry Stuart, Lord Darnley, a grandson of Margaret Tudor. However, disgusted by his debauchery, she soon became alienated from him. The vicious murder, in her presence, of Rizzio, her Italian secretary (some say lover as well), by Darnley and a group of Protestant nobles (Mar 1566), confirmed her insecurity. The birth of a son (Jun 1566), the future James VI, failed to reconcile her to Darnley. While ill with what is thought to be smallpox, Darnley was mysteriously killed in an explosion at Kirk o' Field (1567). In actuality, he wasn't killed by the exposion but was thrown, naked, into a yard injured. He was found later, strangled. One of the conspirators no doubt wanted to make sure he was out of the way.

The chief suspect was the Earl of Bothwell, who underwent a mock trial and was acquitted. Mary's involvement is unclear, but shortly afterwards she was carried off by Bothwell, who had divorced the wife he had only recently married. Mary publicly pardoned his seizure of her person, created him Duke of Orkney, and three months after her husband's death married the man most people regarded as his murderer.

This fatal step united her nobles in arms against her. Her army melted away without striking a blow on the field of Carberry, and nothing was left to her but surrender to the confederate lords. She was constrained at Loch Leven by a minority of the most radical of the Protestant nobles under Morton, and made to sign an act of abdication in favour of her son who, five days afterwards, was crowned as James VI.

After escaping, she raised an army, but was defeated again by the confederate lords at Langside (1568). Placing herself under the protection of Queen Elizabeth, she found herself instead in an English prison. She would remain Elizabeth's prisoner for the rest of her life. The presence of Mary in Engand was a constant source of unease to Elizabeth and her advisers. She had a claim to the English throne through Darnley, and a large Catholic minority naturally looked to Mary as the likely restorer of the old faith. Yet her position as guest or prisoner was always ambiguous. Plot followed plot in England, though after that of Ridolfi (1571), few if any posed any real threat. The last by Anthony Babington in 1586, was known to Walsingham's agents from the outset. Letters from Mary seemingly approving Elizabeth's death passed along a postal route which went via Walsingham, who opened them himself. Mainly on the evidence of copies of these letters, the Casket Letters and later the "Beer Barrell Letters" for they were discovered in a beer kegs, Mary was brought to trial in 1586.

On 8 February, 1587 Elizabeth signed her death warrant, and she was executed at Fotheringay Castle. The execution did not go well for Mary as the executioner was unable to sever her neck with one blow, and was forced to use a grinding motion on her to complete the task. Buried at Peterborough, in 1612 her body was moved to Henry VII's chapel at Westminster, where it still lies.

Mary's beauty and personal accomplishments have never been disputed. She spoke or read in six languages, sang well, played various musical instruments, and had a library which included the largest collection of Italian and French poetry in Scotland. The portrayals of her after 1571 largely fall into one of two types: Catholic martyr or papist plotter, making all the more difficult a proper assessment of Mary as Queen of Scots.


For fans of Mary, Queen of Scots, be advised that a more complete and in-depth article on her is in the works for this web site for 2010. Check back!