One of the many ways the Celts managed to co-exist comfortably with the Romans within their empire was by contributing warriors to the Roman army. Indeed for many young Celtic men it was not merely a sign of tribute or subservience, but a great opportunity to join a truly international force, thereby enabling them to travel all around the Mediterranean world and perhaps make a fortune for themselves. Some like to compare this to the service given by Scots highlanders during the 18-19th centuries, but for me that comparison is not a welcome change, but a negative reminder of the loss of Highland independence. Nevertheless, there is a similarity here. For the ancient Celts, it was also a wonderful way to settle old scores.

The Marcomanni (Latin name) were a Germanic barbarian tribe living along the northern side of the Danube. Around 181 AD, the Marcomanni joined forces with the Quadi to raid the Roman provinces to their south, the other side of the Danube. The land they ravaged was the old heartland of the central European Celts and the people they attacked and slaughtered were Romanized Celts. There was never any love loss between the Celts and the Germans. One could see examples of that in Spartacus's slave/gladiator rebellion in which the Germanic faction refused to march with the "common folk", such as the Celts and Slavs, and went off on their own, refusing the advice of Spartacus. It wasn't long before the haughty Germanic tribes were hunted down by the Roman army and destroyed. Spartacus lived to fight another day.

For centuries, Celt and German had fought with each other, raiding each other's lands. It was a German invasion of a Gallic (Gaul) tribe that forced the Gallic Celts to call upon Roman support, which resulted in the conquest of their lands by their would-be saviors. The Celts of the Danube provinces were now more than happy to fight with the Romans against these barbarian invaders, and in short, order the Germans were defeated and swept back to their own lands.


Celtic warrior with heads attached to his horse
by Angus McBride w/permission. 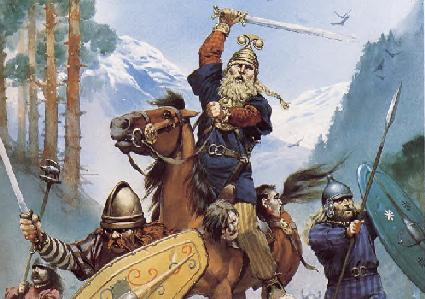 The Celts believed the soul, or what they defined as the soul, lived in a personĺs head. Therefore, heads of enemies were often taken, not only to show battlefield victory, but also to steal the life essence from their enemies. These were brutal times. I'm sure that most of you who have researched something on the ancient Celts have come across one or more images of them carrying severed heads attached to themselves or their horses. This is not a myth. To add to this belief of stealing the enemyĺs soul or essence, the Romans found this Celtic practice was a very useful way to reward their Celtic allies and to get an idea how many kills were made. A Celtic warrior working for the Romans would often bring back the heads of the enemy for which he'd be paid by a Roman commander, just as soldiers in the French and Indian War in the middle of the 18th century were paid for the scalps of the dead enemies. Headhunting was a regular occurrence on the barbarian frontier among the barbarian tribes, and many Celtic warriors outside of the army may have acted as freelance bounty hunters, working in gangs to root out barbarian bandits and bringing their heads back to display in a marketplace before collecting their money.

Roman chronicles recall the name of one of these bounty hunters as Charietto, who operated on the Rhine frontier near Trier. Beginning as a bandit himself, he tired of this way of life and rode into the nearest town to enlist. Unable to join the regular army (reason unknown), he offered himself as a freelance soldier - a mercenary for hire. Operating at night, this tough Celt would creep up on his barbarian enemies at night and cut off their heads as they slept, using sacks of grain to stuff in their mouths to muffle the screams. Soon, he was so successful he led a gang of professional headhunters based on his fearful reputation. The local Roman commander heard of his success and recognized his value. As the Romans pursued invading Franks and other Germanic tribes by day, Charietto and his gang were harassing them at night, instilling fear and terror into the Germans. The combined pressure served to defeat the Franks. Charietto rose swiftly within the ranks of the Roman army until one day when his luck ran out during a confrontation with the Alamanni and he, unable to make flight, was speared to death.


-->Next, in Part 9 of Ancient Celtic Warriors