The Roman Empire ended in Britain at the beginning of the 5th century when the agents of the Emperor and their soldiers left the country to concentrate on the defense of France and Italy against major incursions by the Germanic Barbarians. The dream of the Roman Empire was over in a specific sense in that Britons were now free from direct Roman control, but they had grown used to the Roman way of life. With the Legions now gone from Britain, they Island was invaded from all sides: the Scots from the west, the Picts from the north, the Angles and Saxons from the south and east. Typical of the Celts, they did not band together to fight off the Anglo-Saxon invasion and all hell broke loose. That is, they didn’t band together until a warrior’s named Ambrosious Aurelianus, and after him, someone we might know as “Arthur.” The Romano-Britons had grown accustomed to the way of life as a Roman citizen, or under Roman rule. They liked this life and continued to fight for its survival against the barbarian invaders harrying their coasts. It is the time of the legendary Arthur, although no one has ever been able to prove his existence. The birth of the legendary hero would add a new layer to the history of the Celts. 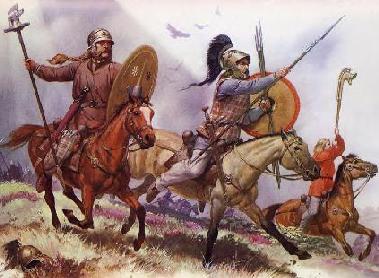 It seems likely that if there was an Arthur, he was a Romano-British warlord (some ancient texts refer to him as a “Dux Bellorum”, or Duke of War. He was apparently never a king, as that is part of the traditional legend. He lived towards the end of the 5th century and followed in the wake of another successful, but less remembered warlord, Ambrosious Aurelianus who, in the 460’s led a group of Celtic British horseman against the Saxon invaders of eastern England. Tradition suggests a picture of Ambrosius as a Romanised ruler in south-western Britain engaged in trying to maintain Romano-Celtic authority against the invading Saxons. He led warriors who were called ‘combrogi’, a word that means ‘fellow countrymen’ and is the root behind the names of ‘Cymry’ and ‘Cumbri’, which are used to denote the Celts of Wales and northwest Britain. Ambrosious, who died in these campaigns against the barbarians, was apparently succeeded by Arthur. All we really know about Arthur is that he was involved (or led) a series of 12 battles. Many of these have been traced to sites in northern England and may refer to battles not just against Saxons, but against Celtic raiders from Ireland or Scotland, who were just as much of a threat to the maintenance of ‘romanitas’. Celtic chroniclers declare that Arthur “carried the image of the Holy Mary, the everlasting Virgin, on his shield’ and ‘the Cross of Our Lord Jesus Christ across his shoulders.’ Thus we may conclude that his campaigns against the pagan Picts, Scots and Saxons could well have been conducted as crusades, with all the attendant savagery this implies. Of course the Scots would be Christenized in around 20-30 years, so calling them pagans might be misleading.

Some have sought to identify Ambrosius with King Arthur, who on various grounds is thought to have flourished in the late 5th century. The evidence for a historical Arthur is, one may say at the outset, at least highly unsatisfactory. This is not to say he did not exist – the evidence simply isn't conclusive enough to make a factual historic claim of his existence. He left no descendants, and we have no trustworthy genealogy of him, and no contemporary records whatsoever. But, cumulatively the amount of tradition cannot be ignored.

Professor Jackson, expert and author of "The Britons of Southern Scotland" cites a study of the subject; "There may have been a supreme British commander of genius in the late fifth century who bore the Roman-derived name of Arturius or Arthur." However, let us be candid: there is no reliable evidence that he held any sub-Roman office, despite the statement of Nennius that he was "dux bellorum"; and no evidence whatever that he was the head of a mobile field force, or acted as "comes Britanniarum"; or owed his military success to Roman military tactics or horsemanship. Now this is at odds with the with other Arthurians, who are fairly certain he was a Briton or ancient Welsh and was a warlord leader of superior horsemen. This is the trouble in trying to prove a legend a true person. Unless an actual grave is unearthed, proving once and for all time that Arthur was real, it will always dwell in the realm of speculation.

Professor Jackson continues with his version as such: "Neither Gildas or Bede mentions him, and such evidence as we possess from later sources is not calculated to inspire confidence. His name occurs in the unsatisfactory Pembrokeshire genealogies, as well as in a later version of Geoffrey of Monmouth." He is mentioned in the "Annales Cambriae for 516 as the successful leader of the British at Bellum (War) Badonis" – a statement supported by Nennius; and again in annal 537 where it is stated that Arthur and Medraut (the Modred of later tradition) fell at the battle of Camlann. So even though evidence is scarce and often contradictory, there is enough there to keep even the most doubting of historians in hopes that the legends may be based in fact after all.

Our longest account of Arthur is that of Nennius, he tells us that when the Saxon leaders, (earlier they claimed it was not the Saxons but rather the Celtic tribes of Scotland), were gaining ground in Britain, Arthur -- who had not been previously mentioned (by Nennius) -- was accustomed to fight against them, along with the kings of the Britons. But the twelve victorious battles credited to Arthur are likely to have been of independent origin, for such lists (bardic oral lists) were a common oral convention. The last battle mentioned, however, has at least the support of the Annals Cambriae. 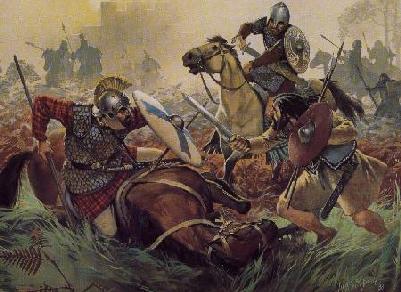 According to Celtic Britain by Nora Chadwick, Arthur probably commanded a flexible force of aristocratic young horse-warriors, riding from Roman fort to Roman fort across Celtic Britain. His stronghold in southern Wales may well have been Caerleon: a stalwart Roman fortress of earthwork ramparts and timber-laced stone walls, long in use after the last Imperial garrison left. Arthur's string of victories culminated in the battle of Badon Hill (Mons Badonius). Nennius describes the hot water that bubbled up at the natural springs of Badon as one of the wonders of Britain. It therefore seems likely that Badon was the Roman settlement of Bath, the ancient Somerset town settled by the Romans, who built baths and a temple around what they and the Celts considered sacred waters. The battle of Mt. Badon possibly took place on the hills overlooking its villas, temples, and hot-water bathing complex. It was a city worth fighting for and it was probably the Saxons of Wessex and Sussex who wished to claim it. The general conflict may have been a siege as Gildas describes it, for the Welsh Annals say that the battle lasted three days and three nights. But, in the event, it seems to have been decided by a grand cavalry charge in which Arthur slaughtered many of the enemy. So decisive was this victory that no other major battles are mentioned for two decades. Arthur appears to have successfully blocked the Saxon advance into the West Country, which even today in its most remote areas retains a strong Celtic identity.

But just how did the Saxons gain such a foothold in Celtic Britain so fast? The answer may lie in the use of Germanic mercenaries from a very old tale, which we shall examine next, in Celtic warriors.