How tales and beliefs of witchcraft and demons came to Scotland.

This essay is the second in a series of four about the occult in medieval Scotland, and indeed Europe. The first was an essay on the infamous cannibal, Sawney Bean and the second is this one on Scottish Witchcraft in the medieval period. The two others, about how beliefs in ghouls, grave robbers and vampires came to Europe and Scotland, and the Origins of Witchcraft in Europe are availble, but not yet online. If you are interested in reading these other two (not online) please use the "contact" link below and tell the webmaster. Or better yet, join my free history discussion forums and read them there. Thank you.

Between the 10th and the 16th centuries all the accusations made of cannabalism and blood-practices against pagans (mostly propaganda) were progressively made against witches in Europe. Supposedly, both men and women were to gather at "sabats" or meetings in secret places were they feasted with demons on the bodies of humans and in the privacy of their own homes were supposed to manufacture potent mixtures from parts of the human body. The records tell of a case of Jubertus (1437) who was supposed to have murdered children and made them into a powder. From the powder imitation children were made for demons to inhabit. So far as the Christian Church was concerned, this was heresy -- and the punishment for heresy was burning.

A witch casting, as imagined in the 19th century 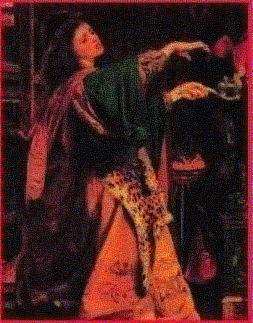 Although literally thousands of people were burned throughout Europe for being convicted of these crimes the situation in Britain was comparatively mild to the Continent, for these beliefs spread slowly and in crossing the Channel they lost much of their potency. The practice of burning witches was never really adopted in England although direct dissenters with the established religion were treated as heretics and then burned (not much better). Witches were burned in Scotland and, again unlike England, torture was used to gain confessions of guilt from them.

Not only was much of the potency of the witch-hysteria in Europe lost in reaching Britain, but it arrived at a later date and the type of heretic-witch who was constantly pursued by the Inquisition in Europe was virtually unknown in Scotland, until a law was passed against them by Mary Queen of Scots in 1563.

Mary was the wife of the Dauphin of France and inherited the throne of Scotland on the death of her mother (Mary of Guise). She brought many European ideas with her and her Witchcraft Act was based on the assumption that witchcraft equated with heresy, hence burning became the prescribed punishment for a traitor, a heretic or a witch -- but not for a murderer.

At the same time the Scottish Reformation was taking place. The Protestant John Knox lived to see the Catholic Queen Mary lose her power -- she flew to England, Elizabeth I and her death -- but the punishment of witches remained the same under the reformed church and the persecution of witches was carried out with more thoroughness than before. Although witch-hunting in Scotland continued sporadically between about 1500 and 1700, there were three main peak-periods of activity, 1590-97, 1640-44 and 1660-63.

James the first and sixth, who plays such an important (but unlikely) role in the case of Sawney Bean, was Mary's son. He was born in 1566, crowned the following year when his mother fled Scotland, and was brought up from that date under the control of the strongly susperstitious Presbyterian clergy. As might be expected, he grew up to be something of a neurotic, if clever man, with a fixation about witchcraft. After his marriage in 1589 his life was threatened by a group of witches (motivated by political ends), and they were burned to death as both traitors and witches. He became utterly convinced of the reality of witches after this incident (documented after this section), and wrote a master book on the subject entitled "Demonology" in 1597 which became the text-book for future witch-hunters. According to this he believed that there was a "fearful abounding at this time in this country of these detestable slaves of the Devil, the witches or enchanters". From that time he actively incited the witch hysteria which created the 1590-97 peak in burnings.

On the death of Elizabeth I of England in 1603, he became the ruler of both Scotland and England (Union of the Crowns), which he ruled jointly until he died in 1625. One of his first acts on coming to the throne of England was to tighten Elizabeth's Witchcraft Act (1563), although he did not introduce the punishment of burning. In England, the punishment was hanging -- provided that it was proved that the witchcraft caused death (which wasn't all that difficult to prove since evidence was routinely manufactured), but James changed this to hanging in any form of witchcraft that was confessed or proved. It is also very clear that he believed in all the various types of allegations which had been made on the Continent against Witches including those of cannibalism (a recurring theme) and similar rituals, since he introduced the following wording into the Act:


"If any person or persons shall use, practise or exercise any Invocation or Conjuration of any evil or wicked spirit, or shall consult, covenant with, entertain, employ, feed or reward any evil or wicked spirit to or for any intent or purpose; or take any dead man or child out of his or her grave, or the skin, bone or any other part of any dead person, to be employed or used in any manners of Witchcrafts.....(they) shall suffer the pains of death".

Thus, there was probably no other individual who influenced the escalation of witch-burning in Britain as much as James I and VI and his influence continued long after his death. All the Witchcraft Acts were repealed in 1736 (about the time that the story of Sawney Bean was given wide circulation in broadsheet form), to the consternation and dismay of many who still believed. A published objection from the Presbytery of the Established Church of Scotland, (Lowland Scotland), in 1743 said that the repeal was "against the express Law of God".

Presented below is the account (official) of King James I case against witchcraft, which so affected his life.

This is another collection of tales of Scotland with the emphasis on Witchcraft. This topic was taken very seriously in Scotland, England, Wales and all of Europe. I have included historic accounts of the tales of witchcraft in Scotland and its effects on the people and King's of the times.

From stories and tales of Scotland, compiled from a collection of books and tomes. Primary Sources at end of story.

Investigation of an alleged witch 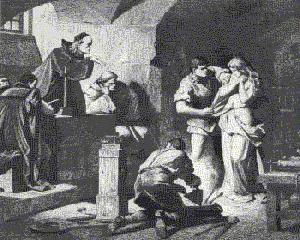 The commissioners appointed to try witches, eagerly siezed upon the report of James VI's bride having been driven back to Norway by the influence of witchcraft. A few unfortunate beings tried for that crime, which common sense might have taught them it was impossible for any human being to commit.

It was proved against John Cunningham, that the devil appeared to him in white raiment, and promised that, if he would become his servant, he would never want, and should be revenged of all of his enemies. It was further proved, that he (the prisoner) "...raised the wind on the king's passage to Denmark: that he met with Satan on the king's return from Denmark, and Satan promised to raise a mist, by which his majesty should be thrown up on the coast of England; and thereupon threw something, like a football into the sea, which raised a vapour." He was condemned and burned.

Agnes Sampson, in Keith, a grave matron-like woman, of a rank and comprehension above the vulgar, was accused of having renounced her baptism, and of having "...received the devil's mark, and raising storms to prevent the Queen's coming from Denmark..." , and also, of being at "the famous" meeting at North Berwick, where six men and ninety women, witches, were present, dancing to one of their number, who played to them on a Jew's harp. It was charged in the indictment, that the devil was present at this meeting, and started up in the pulpit, which was hung round with black candles: that he called them all by their names, and asked them if they had kept their promises, and been good servants, and what they had done since the last meeting: that they opened up three graves, and cut off the joints from the dead bodies fingers; "...and that the prisoner got for her share, two joints, and a winding sheet to make powder of, to do mischief" : that the devil was dressed in a black gown and hat, and that he ordered them to keep his commandments, which were to do all the ill they could. She was condemned and burned.


A group of witches casting 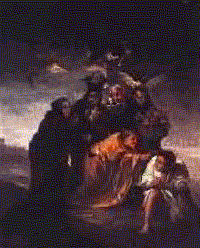 Euphan M'Calzeane, daughter of Lord Cliftonhall, one of the senators of the college of justice (his death, in 1581, spared him from the disgrace and misery of seeing his daughter fall by the hands of the executioner), who was married to a gentleman, by whom she had three children, was accused of treasonably conspiring the king's death by enchantments; particularly by framing a waxen picture of the king (king James VI); "... of raising storms to hinder his return from Denmark" ; and of various other articles of witchcraft. She possessed a considerable estate in her own right; was heard by counsel in her defence; was found guilty by the jury, which consisted of landed gentlemen of note; and was "burnt alive", and her estate confiscated. Her children, however, after being thus barbarously robbed of their mother, were restored by the act of parliament, against the forfeiture. The act does not say the sentence was unjust, but the king was " touched in honour and conscience" to restore the children. But, to move his majesty's conscience, the children had to pay five thousand merks to the donator of escheat, and relinquish the estate of Cliftonhall, which the king gave to Sir James Sandilands of Slamanno.

Next in WitchCraft in Scotland Pt. 2 -- There are a few more specific cases, causes and results regarding this subject.