The Myths of the Stone of Scone/Destiny

Reproduced with permission from "The Highways and Byways of Central Scotland" by Seton Gordon (b. 1886)


Stone of Destiny as it used to be "housed" in the Coronation Throne.

The Celtic name of the stone now in the Coronation Chair in Westminster Abbey is Lia Fail, "the speaking stone", which named the king who would be chosed. Cambray in his "Monuments Celtiques" claims to have seen the stone when it bore the inscription: Ni fallat fatum, Scoti quocumque locatum Invenient lapidiem, regnasse tenetur ibidem: If the Destiny prove true, then the Scots are known to have been Kings where'er men find this stone.

A few miles up the river from Perth is the site of the historic Abbey of Scone, where the kings of Scotland were crowned. But the glory of Scone has long departed, for, even in the time of the writing of the old "Statistical Account"...."on the spot where our ancient kings were crowned there now grows a clump of trees." At Scone the Coronation Stone or Stone of Destiny was "reverently kept for the consecration of the kings of Alba" and, according to an old chronicler, "no king was ever wont to reign in Scotland unless he had first, on receiving the royal name, sat upon this stone at Scone, which by the kings of old had been appointed to the capital of Alba." The Stone of Destiny, now in Westminster Abbey (at the time this was written), is an oblong block of RED SANDSTONE, some 26 inches long by 16 inches broad, and 10 1/2 inches deep: on the flat top of the stone are the marks of chiselling.

Tradition (legend) affirms that it is the same stone stone which Jacob used as a pillow at Bethel and then set up as a pillar and anointed with oil: later, according to Jewish tradition (possible legend), it became the pedestal of the ark in the Temple. The stone was brought from Syria to Egypt by Gathelus, who in order to escape the plague, sailed, on the advice of Moses, from the Nile with his wife and the Stone of Destiny, and landed in Spain. Gathelus sent the stone to Eire when he had invaded that country, and it was later brought to Scotland where it remained in the Abbey of Scone until, in the year 1296, Edward I of England carried it off to Westminster Abbey in England.


An interseting tradition (again possibly legend) that had been given me (Seton Gordon) by the Earl of Mansfield, whose family have owned the lands of Scone for more than 300 years. The tradition, which has been handed down through several generations, is that, somewhere around the dates 1795-1820, a farm lad had been wandering with a friend on Dunsinnan, the site of MacBeth's Castle, soon after a violent storm. The torrential rain had caused a landslide, and as a result of this fissure, which seemed to penetrate deep into the hillside, was visible. The two men procured some form of light and explored the fissure. They came at last to the broken wall of a subterranean chamber. In one corner of the chamber was a stair which was blocked with debris, and in the centre of the chamber they saw a slb of stone covered with markings and supported by four stone "legs". As there was no other evidence of "treasure" in the subterranean apartment the two men did not realise the importance of their "find" and did not talk of what they had seen. Some years later one of the men first heard the local tradition, that on the approach of the King Edward I , the monks of Scone hurriedly removed the Stone of Destiny to a place of safe concealment and took from the Annety Burn a stone of similar size and shape, which the English King carried off in triumph. When he heard this legend, the man hurried back to Dunisinnan Hill, but whether his memory was at fault regarding the site of the landslide, or whether the passage of time, or a fresh slide of earth, had obliterated the cavity, thefact remains that he was unable to locate the opening in the hillside. It may be asked why the monks of Scone, after the English king had returned to England, did not bring back to the abbey the original Stone of Destiny, but the tradition accounts for this explaining that it was not considered safe at the time to allow the English to know that they had been tricked, and that when the days of possible retribution were past, the monks who had known the secret were dead. This tradition, it is held, explains why the Coronation Stone in Westminster Abbey resembles geologically the sandstone commonly found in the neighbourhood of Scone.

This states clearly that the stone is of red sandstone and although in person appears brown-grey, geologists assure it is indeed sandstone inside.
Many scientists believe that the stone, despite all the high-flying mythical background, probably came from a local area considering the type of stone. It most likely came from the times of the Dal Riata kings of Scotland and Ireland (Circa 500 AD, see Story of Scotland, Ch. 1 for details), and possibly brought to Scotland from Ireland to coronate early Scots kings in Dunadd, and was later moved. Taken from "Highways and byways in the Central Highlands"...


On St Andrews Day, 30th November 1996, Scotland's coronation stone, the Stone of Destiny, was installed in Edinburgh Castle. About 10,000 people lined the Royal Mile to watch the procession of dignitaries and troops escort the stone from Holyrood Palace to the castle. In a service at St Giles cathedral the Church of Scotland Moderator, the Right Reverend John MacIndoe, formally accepted the stone's return saying it would "strengthen the proud distinctiveness of the people of Scotland". 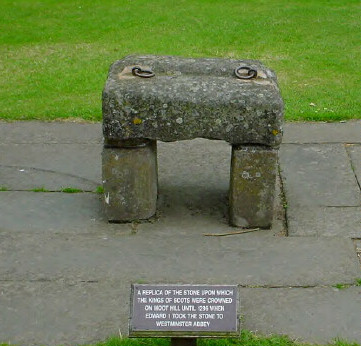 Once inside the castle the stone was laid on an oak table before the grand fireplace of the early 16th century Great Hall. The Scottish Secretary of State Michael Forsyth ceremoniously received it from Prince Andrew, who was representing the Queen.

Outside the castle, under clear blue skies, a twenty-one gun salute was fired from the Half-Moon Battery, echoed by HMS Newcastle lying anchored off Leith harbour in the Firth of Forth. When asked of an official why the Scottish flag, the Saltire (St Andrews Cross) was not flying at the highest point. He replied that because Prince Andrew, (second son of the Queen) was inside, the flag of the United Kingdom, the Union Jack, had to fly on top.

This seemed to summarize the paradox: The Stone of Destiny, traditional coronation stone of Scottish Kings and Queens was stolen by English King Edward the First 700 years ago and is still a powerful symbol of Scottish independence. But its return comes with no promises of real or even partial independence for today's Scotland.