Scottish Origins up to Wallace, Chapter 4. 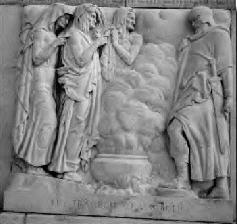 MacBeth was one of the last of the Kings of ancient Scotland. He was Gaelic speaking as were his predecessors. They represented the old Pictish and Scottish Kingdom of Kenneth MacAlpin, their ancestor. It has been said that they were 'Chief of Chief's' in the Clan system. Until the end of his reign, MacBeth's Kingdom was not involved with English arms or influence. As mentioned at the end of chapter three, MacBeth, had he not been defeated by Malcolm III (with English money and arms) , Scottish history would have been drastically altered in ways we can only imagine. It certainly would have remained more Celtic in nature than the way it did under the new monarch Malcolm III Canmore (big or great head). However, it was Malcolm III who triumphed, and now Scotland would forever have the "English Party" influence deeply placed in its courts; Lowland beliefs and politics would be drastically different than that of the Celtic Highlands and that division would eventually have disasterous results for the Highlanders. Scottish ties (Lowland)to England would grow deeper and deeper with every passing generation of Lowland Scot's, and it was from the Lowlands, that the Scots Kings would rule.

Malcolm III Canmore (meaning 'big head') was the first in a succession of kings of Scotland, who were under heavy English pressure or favor. Malcolm III took Scotland from MacBeth with English help, and it was the beginning of a process whereby Scottish Lords were "bought" or bribed with money and/or gifts (titles & lands) to promote English causes in Scotland. As previously mentioned, Malcolm III grew up in exile in England and spoke English as his primary tongue. He also visited Normandy, made friends there, and was also under their influence. The English looked upon Malcolm favorably, not for his sake, but because it was established English policy to get Scots to recognize the English as their Overlords by influencing the Kings of Scotland, and their counselors. Or, if that failed, by force. Once Malcolm was 'firm' on the throne, he forgot many of his obligations to England, and instead made a treaty with Norse, Earl Thorfinn the Mighty, leader of the Northern Vikings in Scotland, in 1059. This, of course, upset English plans greatly. Now Malcolm III had a powerful ally to the north, but an angry neighbor in the south.

Malcolm was not a wise or consistent leader though, and the treaty dissolved in time. Instead, he married Margaret, an exiled Saxon Princess (although she was originally from Hungary) who had taken refuge in Scotland along with her brother Edgar the Aetheling, after the Norman conquest of England begun in 1066. Most of all Anglo-Saxon (English) Nobility fled to the Lowlands of Scotland as safe haven from the Norman invaders.

The Norman Invasion and it's Effect on Scotland

The Norman invasion of England was almost as important for Scotland as it was for England. Henceforth, England and her rulers (now Normans) were in one way or another to play an even greater part in Scottish affairs. The impact the Normans (short for North men, as they were originally Viking settlers in Normandy), is perhaps the greatest impacting event in all of British history. As shown in the Bayeaux Tapestry (pictured above, left), these Norse descendants came with French horses, cavalry, new tactics, and the French language, which they'd adopted a century before. They tapestry itself was created by Norman women to commemorate the event and the details; horses, armor, weapons, longboats, etc, has been invaluably to historians studying the Normans. After the Battle of Hastings (the Norman Invasion of 1066), the Norman lords moved north and began to distribute lands all over England -- and eventually Scotland. It would take only a few decades for their influence to be felt in the Scottish Lowlands, and only a century in parts of the Highlands. This is the beginning of the separation of Lowland Scotland from the Highlands and the Isles of Scotland.

Saxons, Angles from England, sought safe haven from the Normans in Lowland Scotland. The Lowlands, already a mix of Scots, Strathclyde Britons, Angles, and Saxons, went on to be known as Scots. But the Lowland Scots were never again the same as the Highland and Isles Scots. The Lowland and Highland gap, already there, was getting wider with every generation. English and Norman influences were to make themselves increasingly felt in the Lowlands, and it was from the Lowlands that the kings ruled.

Under Malcolm III 'big or great head', and his successors, the foundations of feudalism were laid, at any rate, in southern Scotland. Malcolm's English wife Margaret, a saintly and very determined young woman, set herself to introduce to her husband's court English fashions and customs. She took the Scottish clergy in hand, much to their dismay, sought to impose the religious practices prevalent in England, (Anglo-Saxon England), celibacy, poverty, and so on. Scot's clergy prior to this had been allowed to marry. Due directly to Margaret Canmore's influences , Scottish court life assumed a decidedly English tinge, while in the church a system of regular diocesan episcopacy gradually took shape. Malcolm, being educated and raised since the age of nine in England, was inclined to share his wife's views and during his reign shifted the cultural center of his Kingdom southwards into was had been Anglo-Saxon territory (Lothian area) , only recently absorbed as a Scottish region, thereby seriously offending the Celtic north and west.

Malcolm III, eyeing selfishly his southern neighbors lands in north England, conducted a series of border raids into Northumberland and Cumberland. This, of course, provoked a retaliatory response on the part of the Normans, led by William the Conqueror himself in 1071. William I invaded Scotland and forced the foolish Malcolm to pay homage to him. This did quell Malcolm's raids on England, at least for a while. In 1093 an attack on Northumberland (again), by Malcolm, was repulsed and Malcolm III was killed by one of his Norman friends named Morel. Queen Margaret, for her part, died three days later, piously uttering a prayer of thanks that "...such sadness should have been sent, to purify my final moments." She was in due course canonized.

Over the next three decades, Scotland was in turmoil, ruled over by a succession of weak, insecure kings. During this pitiful succession of inadequate kings, the Normans found themselves more and more easy Overlords of any and all Scots Kings. Normans began to take lands in lowland Scotland much as they did in Ireland.

Another weak king took over after the death of King Donald Ban or Bane. This new king was named Alexander, son of Malcolm III and Margaret. His sister married the English King, Henry the first, while Alexander I had himself married to Henry I's daughter, Sibylla. Finally, after an uneventful reign, Alexander I died and in 1124 his brother David became King of Scots and had an eventful 30 year reign. David I had received a Norman education and grew to love Normans and Anglo-Norman culture. He may have thought they were his friends, but a quote from Anglo-Norman Noble William of Malmesbury, reveals much;
"His manners were polished from the rust of Scottish barbarity".

David recognized his niece, the Holy Roman empress Matilda (died 1167), as heir to Henry I in England, and from 1136 he fought for her against King Stephen (crowned as Henry's successor in December 1135), hoping thereby to gain Northumberland for himself. A brief peace made with Stephen in 1136 resulted in the cession of Cumberland to David and the transfer of Huntingdon to his son Earl Henry. David, however, continued to switch sides. While fighting for Matilda again, he was defeated in the Battle of the Standard, near Northallerton, Yorkshire (Aug. 22, 1138). He then made peace once more with Stephen, who in 1139 granted Northumberland (as an English fief) to Earl Henry. In 1141 David reentered the war on Matilda's behalf, and in 1149 he knighted her son Henry Plantagenet (afterward King Henry II of England), who acknowledged David's right to Northumberland.

On David I's return to Scotland as king he proceeded to distribute large estates there amongst his Anglo-Norman friends, such as the de Brus (the Bruce family), Walter Fitz-Alan, a Breton who became his high Steward (the ancestor of the Stewart Clan), de Bailleul (the Balliol family), de Comines (the Comyn family) and many others who thus became landholders on both sides of the border.

David I also introduced into the Lowlands a feudal system of ownership, founded on a new, French speaking Anglo-Norman aristocracy. Although they intermarried and eventually merged with the old and rapidly disappearing, Celtic aristocracy, these new Scots remained for a time partially Gaelic, save for the south and east of Scotland which now spoke a primitive form of English, (Lothian English) .

Meanwhile, in the Highlands of Scotland, a different, more patriarchal system prevailed (based on the ancient clan system and tanistry), and the King of Scots writ counted for very little. In the Isles of western Scotland and parts of the west mainland, whose Norse-Scot (Gall-Gaels) clans, paid little attention to the King of Scotland. If the Islanders were loyal to anyone, it was a very loose connection to the king of Norway. All that would change when Somerled (progenitor of clans Donald & MacDougal) defeated the Vikings in a great sea-battle. Although Somerled himself would be later killed by treachery, he and his idea had freed many of the western Isles clans from any fealty to Norway. But many of the Island would remain in the Kingdom of Norway until the mid 13th century.

When David I came to the throne in 1124, Scotland had been a rather primitive country, with only small towns and little industry. Also, depending on where you were in the Lowlands in 1124 , you could have to speak Latin, French, English or a number of Gaelic dialects just in the south of Scotland! Coinage began by following English usage in regard to types and weights: the earliest silver pennies were those of David I (1124-53) and copied Stephen's, though the use of profile portraits in the 13th and 14th centuries showed an interesting divergence. The Scottish church, with only three Bishops, had little influence. When David I died in 1153 much had changed. In many areas of the Lowlands, what remained of the old Celtic way of life had been swept away and a new Anglo-Norman order of things were established in it's place.

While David did little to help the old Celtic ways, he modernized a backward Scotland -- and Scots benefitted from David I's administrative work. Especially the future kings of Scotland.