Scottish Origins up to Wallace, Chapter 2.

The Romans left Britain never having conquered Scotland. When the Romans first arrived, there were nearly 20 Tribes, within 250 years there were FOUR main people.


Fanciful rendering of a Pictish Woman 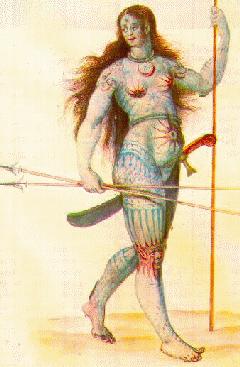 The most enigmatic of these people were the Picts who ruled the north, east and most of central Scotland. Originally a coastal people, like so many of the early tribes, these early Celtic people left no written language, no records of their descendency, which was through the female line. They were, in time, after mixing with other cultures, assimilated in with the new settlers and cultures. But in their height of power , the north and south Pictish culture was a rich and powerful one. Their Federated Kingdom, stretched from the Pictland hills to the Pentland Firth.

They left ornate symbol stones and advanced practices of art and culture as well as a formidable military.

Proof of a cultured people, that there can be no doubt, and they were an older Celtic race than either the Irish or the Scots. Unfortunately, their form of the Celtic language was much different from that of the Scots, Irish, Welsh and other Celtic races in Britain, and with no written history of the Picts, little else is known.

Other settlers came in from the coasts or from the Continent (mainland Europe) and carved out their own territories. The second of the four main groups left after the Romans, were the Britons or the Britons of Strathclyde. They would dominate the west of lower Scotland and some of England. Their lands stretched through Strathclyde south through Cumbria to Wales. This is most likely the Celtic people that helped settle Wales, or at the very least were strongly associated with the Welsh both in culture and language.


The third group, the Angles, from Germany settled southeast Scotland and portions of England. Warlike and hungry for land they drove out the Britons living near them, and carved out their kingdom. The Angles were the only non-Celtic race of the four main early settlers of Scotland. And this would prove to be a major problem for the Celts later on, especially when the Angles and Saxons combined to form the powerful Anglo-Saxons -- the early English.

Lastly, the fourth Tribe came to settle Scotland. They were also known as a warlike people, descended from Ireland. The Origins of their name -- Scots is beleived to be a corrupted form of Scottus or Scotti , which meant "raiders". A Celtic, warrior, combative and expansive race, the Scots came in about 500 A.D. Dalriada was the Kingdom of the Scots and stretched from east Ireland through the Western Isles to Argyll, in western Scotland.


Much of Scotland became Christian long before England. Due initially to a monk named Ninian or Saint Ninian. He was born around 350 A.D., a Briton, he went to the continent where he was ordained a priest, came back to Scotland and evangelized Galloway and the Southern Picts at Fife and Perthshire. Ninian's followers may have taken the new faith as far north as the Shetland Islands.

The Scots of Dalriada had Irish missionaries of their own. St. Oran probably established the first monastery at Iona. But St. Columba from Donegal, was the missionary who made the Scots a dominate Tribe. Legend has it that Columba came to Iona because of a copy he made of a psalter (holy book) without the owner's permission, and the man he borrowed it from took the law against Columba and won the case. So Columba, taking a vow, left for Scotland in exile. That is the legend, but most likely, it was simply Irish Monastecism that was expanding.

The Irish Celtic Church was Monastic, unlike the great religious houses that were to come to Scotland in the middle ages. Strict, it demanded poverty and obediance from its clergy who were Monks, not Priests.

Lonely Islands, such as Iona, pictured at right, sought after sights for new monasteries. Conversion to Christianity brought a flowering of Christian and Celtic art, notably from the Picts. Irish Monastecism and traditional Celtic lore, became the new Faith. This, of course, would not be tolerated by the Roman Church.

Oswald, King of Northumbria was converted to the Celtic Church while at Iona. He invited Aiden, (one of St. Columba's disciples), to set up a Monastery at Lindesfairne off the coast of Northumbria. However, Oswald's Anglo-Saxon Queen was a follower of the the Church of Rome, not Ireland.

The differences, aside from the pagan lore in the Irish church, were that the Irish Church was organised on Monastec tribal basis, the Roman church, (most all converted Christians were Roman Church followers), had territorial Bishops and considerable differences of rite, but the MAIN difference, was that the Irish Celtic Church held on to the old system of calculating Easter, and found themselves out of line with the rest of Christendom. In 663, King Oswald of Northumbria, invited representatives of the two church's to Yorkshire to resolve the dilemma.

Oswald's decision to go with the Roman Church over Irish Monastecism changed not only Northumbria, (northern England), but also Scotland.

Roman Orthodoxy replaced Celtic Monastecism. Christianity was a new and powerful magic to the people, Holy Relics of Columba and his disciples were venerated.

In 732, the bones of Saint Andrew were brought to Scotland. One of the twelve Apostles, Andrew became Scotland's Patron Saint. But a refugee Angle form Hexum in England brought the Relics to the heart of Pictland, (Kilriman and Fife), which later became the Cathedral town -- St. Andrews.

Elsewhere in Scotland, around Glasgow, the Gospel was brought independently
by Kentigern. Kentigern was a Briton (of Strathclyde) , and there was very little contact among the Christian streams, British and Irish or Celtic.

At this time, there were three main cultural strains in Scotland: the Picts, the Scots and the Angles, and the new religion did little to bring them together. The Britons were already being chased out by the Angles and Saxons and sought refuge in Brittany and to a lesser extent, in Wales.

In future centuries, religious clashes were to be behind many Scottish, bloody battlefields.

The Celtic and Roman Churches are still in disagreement today on several aspects of church rituals and dates.

On 20 May 685, the Picts had been threatened by the Angles of Northumbria, who were trying to increase their lands to the north. At the battle of Nechtansmere, the Picts under Brude, defeated the Angles and put paid to any further Northumbrian (Angle) northward expansion. The border was set. Had the battle gone the other way, a nation called Scotland might never have happened at all.


The Viking invasions, and Scottish Nationality.

Viking sword of the Period.

In the 8th century (793), the Vikings, or plunderers from Norway, (initially), were attracted by the wealth of the Monasteries and the easy treasure to be found within.

Silver, gold and precious manuscripts were sources of great booty. Islands like Iona were frequent targets. In 806, the entire Iona community was murdered and plundered. The Monks of St. Ninian's Island, Shetland, were also attacked, and the monks, pre-warned, quickly buried all that was of value. The Monks hidden hoard, (from the Vikings), of 8th century gold and silver wasn't discovered until 1958. It is a dazzling display of gold and silver relics in remarkably good condition that is as impressive today, as it must have been to the treasure hungry sea raiders in the 8th , 9th and 10th centuries.

*{Author's note: The Norse involvement in Scotland, Ireland and England (Danes), is a very large topic all by itself. Its scope and inpact is huge, and is a topic on which I planto devite furture articles. For now, only significant events concerning Viking (and there are many) raids, turned settling, will be discussed.}

By the end of the 9th century the Vikings came to Scotland to raid and settle. It is curious that the Vikings settled so quickly in Scotland and Northern and east Ireland, and slower in England. Certainly resistance was just as fierce in Scotland and Ireland as it was in England. In general, none of the native British or English were able in any significant way, to stop the Northmen whatsoever. They appeared unbeatable, even when outnumbered. However, the Scots seemed to have something in common with the Viking and after a while intermarriages, both common and noble, with established clans took place in north Scotland (Caithness and Sutherland) and extensively throughout the Western Isles of Scotland, called the Inner and Outer Hebrides. To this day you can find Scottish Clans with direct Viking (Norse) descent. Clan Gunn in the North, Clan MacDonald of the Isles and Clan MacLeod (pronounced MacCloud) in the west mainland and Isles, along with other Clans (such as MacQueen and MacAulay are of Norse/Scot origin). They even spoke both Norwegian and Gaelic for several centuries in the Western Isles. All Clans of this unique heritage have a reputation as skilled fighters who seemed to live to fight. These same Clans were some of the earliest to use the longer swords and employ archers in their ranks.


The most likely reason for the massive numbers of Scandinavians looking for new lands is attributed to overpopulation in Norway, Sweden and Denmark, but the truth is we really don't know why the Vikings struck out.

The Norwegian or Norse Vikings, (the word Viking is believed to be derived from the Norse word "vik" meaning bay - since the Vikings used the longships so effectively in bays this seems possible), are the specific ethnic Viking that plundered then settled in Scotland and parts of Ireland. In about 800 A.D. they settled Jarlshof on the Shetland Islands; also Lewis, in the Hebrides, where over one hundred villages still have Norse names.


From the Orkney to the Scottish Western Isles, the Norse/Scots (Gall-Gaels, or foreigner Gaels) settled large areas of Ireland, Iceland, the Isle of Skye, the Isles of Lewis and Harris (lands the Clans MacLeods of Lewis and Harris respectively), and many most of the western coast of Scotland. Alrger section of Northeast England , i.e around York, are Viking settled areas. Their Longships gave them mastery of the seas. Their fearless style of combat, and pagan belief in glory from death in battle, and their large size for their day, made them nearly invincible foes. Not to mention the fearsome "Berserkers": certain Vikings were said to be afflicted with spirits and often fought without armor or clothing, biting and chewing on their shields before battle. It is recorded that if the affliction came over these berserkers while not in battle, they had to go ashore and wrestle large boulders and trees until the malady passed. Today, we have the word "berserk" from this peculiar behaviour.

Although a new ship design does not sound like much today, in the eighth and ninth centuries, this ahead of its time ship was far superior than any other European, (or any other Continental) ship ever built and the Scots benefitted from this heritage to this day. The Scots ship building yards as in Aberdeen, were where a large portion of the English fleet was built, and used against France and Spain in later centuries, owes much to this heritage.


Next:
Chapter 3, Scottish Nationality under Kenneth McAlpin and MacBeth