Introduction
~~~~~~~~~
Welsh literature has extended in an unbroken tradition from about the middle of the 6th century to the present day, but, except for two or three short pieces, all pre-Norman poetry has survived only in 12th to 13th century manuscripts. Welsh had developed from the older Brythonic by the middle of the 6th century. In the Historia Brittonum (c. 800) references are made to Welsh poets who, if the synchronism is correct, sang in the 6th century. Works by two of them, Taliesin and Aneirin, have survived. Taleisin wrote odes, or awadlau, in praise of the warlike deeds of his lord, Urien of Rheged, a kingdom in present day south west Scotland and north west England.


To Aneirin is attributed a long poem, Y Gododdin, commemorating in elegies an ill-starred expedition sent from Gododdin, the region where Edinburgh stands today, to take Catraeth (Catterick, North Yorkshire) from the invading Saxons. The background, inspiration, and social conventions of the poems of Taleisin and Aneirin are typically heroic, the language is direct and simple, and the expression terse and vigorous. These poems, and others that have not been preserved, set standards for later ages. The alliterative verse and internal rhyme found here were developed by the 13th century into the intricate system of consonant and vowel correspondence and internal rhyme, called cynghanedd.

Sometime about 595 - 600 AD a crack warrior band of three hundred men set out from Gododdin to attack the invading English.

They met at the battle of Catraeth (Catterick) and, though the Gododdin men were reputed to have slain seven times their number of the enemy, they were overwhelmed by superior numbers and perished without a survivor.


Y Gododdin has been preserved in only one medieval copy, the 13th century manuscript known as the Book of Aneirin, now kept in Cardiff Central Library. As already mentioned, Aneirin was a poet who flourished at the end of the 6th century, so if we accept this poem has his authentic work, either in part or in its entirety, a gap of some six and a half centuries separates the date of its composition from that of the earliest surviving copy.


The poem survived from the earliest period, one can assume, by oral tradition and partly written copies which have not survived. The poem itself is in the form of an elegy, or series of elegies, for individual members or sometimes groups of members of the tribe of Gododdin who fell at the Battle of Catraeth (c. 600). The Gododdin were a Brittonic (or Brythonic) people who inhabited the south-eastern area of Scotland during the Roman and post-Roman period and were ruled from their tribal centre at Din Eidyn (Edinburgh). The geographical background of the poem which perpetrates the memory of their fallen warriors is therefore, not Wales, but the extensive northern territories which continued to be Welsh-speaking well into the 7th century, and later in some areas.


Y Gododdin has been described , no doubt correctly in strict geographical terms, as the 'oldest Scottish poem', but its language, in the form in which it has been preserved, is either Old or Early Medieval Welsh.


The geographical and historical background of Y Gododdin therefore lay in northern Britain in the latter part of the 6th century. In a territory very much larger than modern Wales, peopled by Brittonic-speaking communities, three substantial kingdoms had by this time emerged; Strathclyde (Ystrad Glud), Rheged and Gododdin, and their leading families and ruling classes are known as the 'Men of the North'.


In Strathclyde the most notable figure was Rhydderch Hael (the 'Generous'), who held sway in his fortress of Dumbarton or Alclud, although Glasgow later became the centre of the kingdom. Memories of him were preserved in association with the Merlin legend. He is, however, not mentioned in Y Gododdin, and is not in any way connected with the subject-matter of the poem. Carlisle was possibly the centre of Rheged and its most celebrated ruler was Urien. Urien has been called Llyw Catraeth, 'ruler of Catraeth', i.e. the very locality at which the men of the tribe of Gododdin are described as fighting in the poem Y Gododdin. Urien, however, is nowhere mentioned in connection with the battle, and probably died before it took place.


A Typical Votandini or Gododdin Village 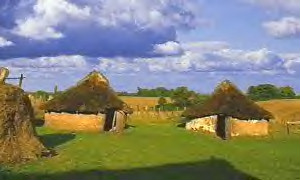 The Gododdin, as already mention, inhabited the territory, to the east and north-east of the other two kingdoms. Its capital was at Din Eidyn but extended from Manaw of Gododdin in the area of Stirling to the region of the Tyne. The tribe or people known as the Gododdin (earlier the 'Votadini') gave their name to the territory they inhabited, as also, later, to the poem which commemorated their fallen warriors. Their ruler at the time of the battle of Catraeth appears to have been Mynyddog Mwynfawr (Mynyddog the 'Wealthy') who, however, is a shadowy figure, for unlike Rhydderch and Urien his existence is not attested in any early source apart from 16 references in the text of Y Gododdin itself and one in Gorchan Tudfwlch. He is not mentioned in any of the genealogies of the Men of the North, or in any early poem other than those in the Book of Aneirin.


The Poet
~~~~~~~~
The poet is well attested in the early period, being mentioned in the section of the Historia Brittonum which embodies northern traditions and the names of the four kings Urien, Rhydderch, Gwallog and Morgant.


In the stanza entitled 'The Reciter's Prologue', Aneirin is described as the 'son of Dwywai'. This allusion to Dwywai links Aneirin with the royal houses of the North, for according the genealogies a Dwywai was the daughter of Lleynnog and therefore the sister of Gwallog. She was also said to be the wife of Dunod Fwr and the mother of Deinioel, the patron saint of Bangor (Wales), who according to the Annales Cambriae died in 584. If Aneirin was the younger brother of Deinioel his dates could fit very well with those of a poet composing in the late 6th or early 7th century.


However, Aneirin is an obscure figure. It is probable that all we can be reasonably certain of knowing concerning him is that he existed, that he functioned as a poet in the kingdom of the Gododdin, and that an early date in the authorship of an elegiac poem on the warriors who fell at the battle of Catraeth was attributed to him.


Conclusion
~~~~~~~~~
Although Y Gododdin records an event which was a total disaster, it exalts the concept of the warrior who welcomes death in battle if it leads to enduring fame and honour.