The Battle of Dupplin Moor

The Disinherited and the Battle of Dupplin Moor

They made an unopposed landing at Kinghorn and boldly marched inland to Dumferline, preparatory to a descent of Perth. But their further advance was blocked by the Scottish Regent Donald, Earl of Mar. The royalist Scots were deployed on the far banks of the Earn and though numbers for both sides are uncertain, they considerably outnumbered the rebels. Mar seems to have overestimated the strength of the enemy forces and made no move on that hot, humid summer day, 8 August, other than to put a strong contingent by the river crossing. 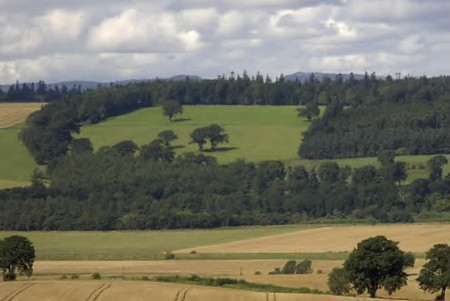 Whether his intention was simply to block the bridge or if he planned a more offensive action the next day is unclear. During the short hours of darkness, Edward Balliol seized the initiative, his men crossing by a ford to attack Mar's camp, putting those not killed to flight. Though beaten in the initial stages, Mar had placed the bulk of his men by the bridge and avoided a catastrophe. In the morning he led his army, in one central column, flanked by two lesser formations in support, against the rebels and Balliol.


Undismayed, Balliol fell back from the camp setting up his men on the slope behind, and drew up in battle order. His dismounted knights and men-at-arms formed the main "battle", with skirmish lines of archers borrowed from the English, extended on the flanks and echeloned towards the center. His only reserve were troops of Continental mercenaries who remained mounted, no more than forty riders in all, according to Sir Oman's "History of the Art of War", although it seems likely that more riders were indeed involved.

The banners of no less than twelve earls blazoned above the advancing host as the regent's strong central divison crashed headlong into the ranks of the Disinherited, and, by sheer weight of numbers, threw them back. The massed Scottish spearmen (schiltrons), advanced up a long slope towards the English. The ensuing melee became a shoving match at some point as bodies were massed against one another and the rebels turned to their side to push harder.

Shoulder to shoulder they pushed at the English center, but could not find a point of weakness they could easily exploit. The English lacked the numbers but the gradient was in their favor. Gradually the English men-at-arms, taking full advantage of the slope, began to force the Scots back. Quickly the archers on either English flank began to fire their deadly arrows into the tightly packed Scottish formations. The rain of arrows forced the Scots into an ever decreasing area. As the flanking columns hurried on they were met by withering fire from Balliol's archers and recoiled back upon their own lines and into the main body. The press became so thick that many died of heatstroke or suffocation and the living had scarcely room to lift their weapons. Within a few minutes the mound of Scottish dead was several feet high. The few survivors, one of which was the last standing Highland schiltron division, tried to turn and flee down the hill. One chronicler described the ensuing scene as resembling a burial heap, into which the English poured flight after flight of arrows. The panic-stricken Scots tried to escape by climbing over one another, making the press worse as the formations behind blocked them in. It continued, according to one chroncler, "until the Scottish army had turned into a writhing heap nearly fifteen feet high", on which the English soldiers stood grotesquely, jabbing with their spears and swords at any sign of life beneath them.

The attack was halted as it faltered and broke, the survivors poured down the bloody slopes already covered with their own dead. Balliol's forces under Henry de Beaumont led the reserve down the hill after the fleeing Scots, hacking and stabbing at the mob in relentless pursuit. When the slaughter was finally over, Donald, earl of Mar; the earls of Menteith amd Moray; Robert Bruce (former king Robert Bruce's bastard son) lord of Liddesdale; Alexander Fraser; the High Chamberlain, and eighteen lesser nobles, nearly seventy knights were slain. Most accounts say 2,000 men-at-arms and an uncounted mass of common infantry lay together in death and defeat. From this point on, for the nearly a century, whenever Scots and English fought, the combined use of longbow archers and men-at-arms supported by heavy cavalry ususally carried the day for the English. 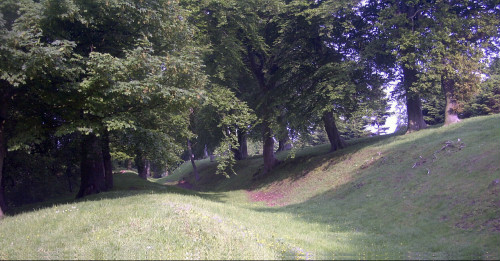 The Disinherited, under Edward Balliol, reported (according to English chroniclers) only thirty-three knights and men-at-arms, (around 200 infantry) and no archers slain, although this number may be disputed. Balliol had won himself a kingdom, and Dupplin Moor, as the battle came to be known, became a model for later English victories. The lesson of Dupplin Moor was plain: lumbering spearmen, likely schiltrons, would always be vulnerable to the English Longbow archers. The Scots should not have sought to engage the enemy unsupported by cavalry or their own archers. But this lesson went unheeded. The brilliant military mind of the former King, Robert the Bruce, and his victories before and after Bannockburn, were about to be used without proper understanding. The need for guerilla tactics which was so vital to the Scots and their victories in the First War of Scottish Independence, were tragically ignored. Bruce had warned, nay, pleaded with his lords before his death to continue the use of hit-and-run guerilla tactics and lightening raids when outnumbered. Never, he had warned, should the smaller and lesser equipped Scottish forces attempt to face the English in an open field of battle unless the circumstances were in favor of the Scots. But apparently incapable of understanding the raids of Bruce and Douglas, and tactics which had won Scotland her independence, the inheritors of Scotland continued a pale imitation of the schiltron in every battle, regardless of the different English tactics. It was tragically clear they did not have the strategic and tactical grasp of warfare that Bruce, Douglas and Randolph had employed so effectively against Edward I and II.

The brilliant tactics of the Bruce were vacantly imitated with disregard to any fundamental understanding of why Bruce's leadership had been so successful. What was to become known as the 'Second Scottish War of Independence' had begun at Dupplin Moor, and this time, Scotland had no saviour such as Wallace or Bruce to take charge.

Edward Balliol's flimsy grip on the throne proved as insecure as his father's however, and though crowned at Scone (without the presence of the Stone of Destiny, which was stolen by Edward I in 1296), he failed to command any serious following. In December of that same year the new regent, Andrew Moray of Bothwell, passed the baton of command to the heroic Randolph's son, the earl of Moray, who suprised and scattered the armies and men of the Disinherited at Annan, driving Edward Balliol "half-naked" from the realm. But this was only the opening shot in a series of clashes with the English, and their disregard for Scotland as a sovereign nation. Halidon Hill was too soon to follow.